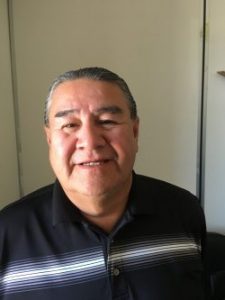 Vern Cheechoo works for Mushkegowuk Council as Director of Lands & Resources. The Mushkegowuk Council is an organization that represents 7 First Nations with a population of 10,000 people, and whose territory comprises of approximately 1/5th of Ontario. Vern is a proud member of the Moose Cree First Nation located on the Southern shores of James Bay.
As Director Vern is responsible for Land Use Planning Project (MNRF), Mushkegowuk Northern Mineral Tech Table, Ministry of Northern Development & Mines (MNDM), Mining Development Advisor program (MNDM), Ring of Fire project MNDM & Indigenous Northern Affairs Canada, Environmental Stewardship and Climate Change Division Ministry of Environment and Climate Change (MOECC). Each year negotiations with the government ministries are necessary to keep these programs going.

The Lands & Resources department of Mushkegowuk is not a part of the original structure of the Tribal Council funding mechanism. So each year Vern has to ensure he has a salary with project based funding that Vern negotiates to cover the staff and his salary.

On a personal note; Vern is a Singer/Songwriter, with multiple nominations for Juno’s, Saskatchewan Country Music Association Awards, and a winner with the Aboriginal Music Awards. Has travelled and played music all across Canada with the likes of Bruce Cockburn, Indigo Girls, Kevin Welch, and many festivals throughout his career as a musician. He is a member of the Society of Composers, Authors, and Publisher’s of Canada.