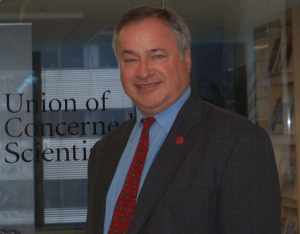 Alden Meyer is the Director of Strategy and Policy for the Union of Concerned Scientists and Director of its Washington office. He provides general oversight and strategic guidance for UCS’s advocacy on global warming, energy, transportation, scientific integrity, agriculture and arms control issues. He is UCS’s principal advocate on national and international policy responses to the threat of global climate change, and also works on renewable energy and electricity policy issues.

Mr. Meyer has testified before Congress on energy and environmental issues, and has authored numerous articles on climate change, energy policy, electric utility and nuclear power issues for both environmental and general interest publications. He has served on several federal advisory panels, including the Secretary of Energy’s Advisory Board.

Mr. Meyer received his undergraduate degree from Yale, concentrating in political science and economics. He also holds a Master of Science degree in human resource and organization development from American University.