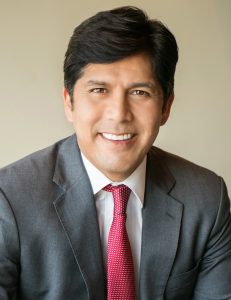 As President pro Tempore of the California Senate, Kevin de León (D-Los Angeles) has led the 40-member Senate body to historic accomplishments that will improve the lives of Californians, the state’s environment and economy for decades to come.

In his three years leading the Senate, Senator de León has empowered his caucus members to take on big and bold legislation that has shaped the policy conversation in the nation. Through his ambitious approach to policymaking, he has authored groundbreaking legislation on a variety of issues that are now national models. The progress that has been made on critical issues confronting California and the nation stands in stark contrast to the gridlock in the U.S. Congress.

He is the first Latino elected to lead the State Senate in over 130 years.

Senator de León is focused on building a more prosperous, equitable, and sustainable economy for the Golden State.

His legislation has created the most ambitious renewable energy goals in the nation, the first-of-its-kind retirement-savings program for low-income workers, and has required a quarter of all cap-and-trade revenue be spent in disadvantage communities.

He has an extensive record on women’s and workers’ rights and gun-violence prevention.

Senator de León served four years in the Assembly before being elected to the Senate in 2010.